This post will describe my current setup for development on OS X. 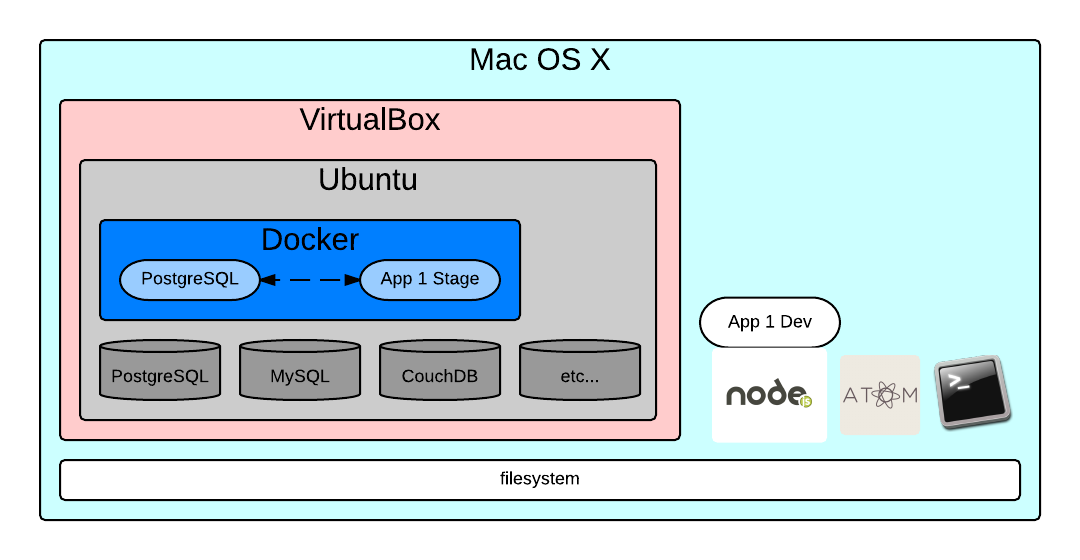 I generally build web applications that involve a node.js based application server, one or more database servers, and an optional front-end web server (used in stage and production but not in development).

Just go to town with homebrew?

The simplest thing would probably be to install all my tools and databases with homebrew straight into OS X. And I think actually that's probably fine for a lot of people. I don't do it for reasons that are admittedly a bit emotional/OCD.

So for the above reasons, I use Vagrant to script a base Ubuntu VM I call "dbs". I give this 2 network interfaces:

I put the host name "dbs" with the host-only IP in my /etc/hosts file on my mac and I can access it via ssh dbs. I directly install via apt-get install all the DBs I want to use for local development and client work: postgresql, mysql, couchdb, elasticsearch, etc. I run these on the default port for simplicity and try not to do too much configuration. I do have to configure them to bind to the host-only IP address though, which also makes sure they are not reachable from anywhere other than my mac.

That gets me what I need for developing multiple client projects. After a reboot I have a shell alias to start this VM: VBoxManage startvm dbs.

I've started using docker a bit both for client work and one personal side project and so far I'm liking it. To allow me to do docker builds and deploy containers, I run docker inside the "dbs" VM as well.

When I created this setup boot2docker was not quite ready for prime time, but if I had to start over, I might just use boot2docker and run everything as containers. But what I have is every bit as easy to manage for the moment, so I haven't bothered to rebuild it.

So for docker work I just export DOCKER_HOST=tcp://dbs:2375 and use the docker command from homebrew on my mac to do my docker work.

For my dockerized side project, I can run the full stack of docker containers exactly like I do in production all locally on my laptop, which provides an adequate staging environment such that I don't feel a dedicated staging system in the cloud is necessary. I use the same automation scripts to automate docker stuff on my staging VM and for production I just point them at the production host which is a digital ocean droplet. So far it's worked pretty well for me.