So I've volunteered to help Boulder Community Computers set up some automated Ubuntu OS installations over their local area network. Being as this is a large part of what I do professionally, this is something easy for me to do that should help them be more efficient. Their network layout is going to look something like this I think:

OK, so let's talk about some of the goals/requirements:

So overall, Ubuntu can meet all of these goals easily. Here are the details.

So we want an Ubuntu server machine with two network interfaces (multihomed) to act as our network install server. This machine will provide DHCP/PXE, TFTP, NFS, HTTP, and HTTP proxy services to the target machines. It will also act as their default gateway, routing their traffic from the OS Build Network out to the Office LAN and then out onto the Internet and back. Here's how we get this server installed and configured.

I used a VirtualBox VM for this while testing this setup, and we will probably use that in their "production" environment as well. If you use a physical computer, make sure it has 2 network connections. You can select "OpenSSH Server" during the install or install openssh-server later. Once the OS is up and running, we need to configure both of the network interfaces. We'll be using RFC 1918 private addresses for both. In this case we have a 10.0.0.0/8 network as eth0 which is the Office LAN and a 192.168.0.0/16 network as eth1 which is the OS Build Network. The Office LAN is your typical home or office type network where a router is serving private IP addresses over DHCP and providing Internet access. In VirtualBox I set the first interface to be a bridged interface eth0 and the second interface to an internal only interface eth1. To do this we edit /etc/network/interfaces as root as follows.

A quick note about code samples and long lines

Several of the code samples in this article require very long lines. These don't display well on the web, but they are displayed using a CSS overflow horizontal scrollbar. Hopefully they are easy enough to read, copy, and paste.

Install dnsmasq via apt-get install dnsmasq. Then as root do a mkdir /var/lib/tftpboot. Edit /etc/dnsmasq.conf to look as follows.

Restart it with service dnsmasq restart

The next big step is to make the Debian Installer available as a PXE boot image. We're basically following this article here, except we're doing Ubuntu Lucid 10.04 instead of Feisty. Do the following.

OK, at this point we should be ready to boot our first test target machine into the Debian Installer network boot service OS. PXE boot a machine on the OS Build Network (again, I used a VirtualBox VM). You may have to fit a key like F12 to instruct the machine to boot from a network card. I have to hit F12 then "l" to boot from the LAN on my VirtualBox VM. If all is well, you should see a lovely Ubuntu installer menu like this (you won't have the menu items containing "10.04" yet, but we'll add them later). 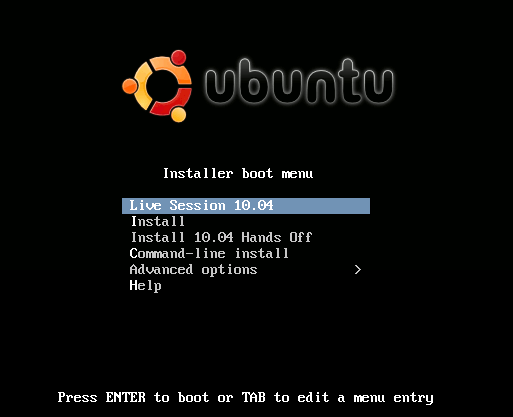 So now we can use this to install Ubuntu onto the target. Well, almost. We don't have Internet access from our OS Build Network working yet, so let's get that going.

Setting up Routing to the Internet

We want to allow our target machines to connect to the Internet, which means we will configure our Net Boot server as a very basic router and NAT firewall. This is often called Internet Connection Sharing when used for this simple purpose. We're basically following Internet Connection Sharing Setup docs from the Ubuntu community wiki. As root, add net.ipv4.ip_forward=1 to /etc/sysctl.conf. Then run these commands.

Now add iptables-restore < /etc/iptables.sav to /etc/rc.local as root just above the exit 0 line. This will get us going again when we reboot.

Now you should be able to PXE boot a target, select "Install" from the menu and do an Ubuntu installation. However, it's going to be a normal install over the Internet, which is fine for doing one or two boxes, but since we want to crank these out en masse, we'll want to cache the bits and grab them locally.

Caching the Ubuntu Packages with apt-cacher-ng

I tried both squid and apt-cacher for a solution to locally cache the bulk of the Ubuntu binary package payload, but neither worked very well. apt-cacher-ng seems to do exactly what we want and nothing more with no configuration. install apt-cacher-ng. This "just works" with no setup. After it's installed, if you PXE boot a target, select "Install" and go through the interactive install, when prompted for a proxy, enter http://192.168.8.1:3142. This is the OS Build Network IP of the Net Boot server and the apt-cacher-ng proxy port. Now all your packages will be cached on the OS Boot Server. The first install will download them from the Internet. Subsequent installs will get them from the local cache and thus be much much faster and more efficient.

OK, we now have network based OS installs working, but since we're planning on doing many of these, we want to fully automate this. To do that, we'll use a preseed file to configure the Debian Installer to not ask any questions. Configure a file at /var/lib/tftpboot/bococo.seed with the the content linked here: bococo.seed.

Now we'll add a new item to the PXE menu to trigger a hands-off automated OS install. Edit /var/lib/tftpboot/ubuntu-installer/i386/boot-screens/text.cfg and add this entry.

In order to get that file over HTTP, we'll server it up with the nginx web server. install nginx via apt-get install nginx. Then we can edit /etc/nginx/sites-enabled/default and change location / block to set the new document root to the tftpboot directory so it looks like this.

Restart nginx via service nginx restart. Now we should be able to PXE boot the target and select the "Install 10.04 Hands Off" option and the entire thing should happen automatically.

Network Booting into the Live Image

One final bit of utility functionality we want to provide is a network bootable live Ubuntu image. This will be handy for testing hardware compatibility, performance, etc. First we'll download the primary Ubuntu Desktop CD image and make it available over NFS. Do the following as root.

Now add another entry to your PXE menu for the live Session. I also like to move the menu default option to the live session, so my final /var/lib/tftpboot/ubuntu-installer/i386/boot-screens/text.cfg looks like this:

And that's it! We can now netbook into a live session, an interactive install, or a fully automated install.

Thanks to the authors of the above reference web pages and Nick Flores for collaborating on this.