Lighting Up Your JavaScript With the Debugger

The Debugger is a Fantastic Comprehension Aid

For most of my time as a programmer, I've been in the "no fancy tools camp". I spurned IDEs (and still do), complex build tools, any flavor of a "project" file an editor needed to supplement the filesystem layout, code analyzers, coverage tools, and all that ilk. I got things done by printing to stdout, kept it simple, and moved on. Not that I haven't tried all of these things at some point or another (periodically), but I found all of them were so awkward and cumbersome that not a single one of them stayed in my tool box beyond that initial experimentation or a single project.

However, things have changed with the current state of the Chrome developer tools debugger. I now use this tool constantly and find it to be an absolutely key piece of my arsenal. It's definitely in my top five most valuable tools list. It's not absolutely necessary, but getting by without it now feels like groping around in the dark when there's a perfectly good light switch available.

I attribute this mostly to the fact that Chrome made this tool built-in to the browser and ready to go with the click of a context menu. No plugin. No extension. No special developer build. No configuration file. It's just there and it works.

However, my main goal with this post is not to convince you to use the debugger because it will allow you to find a fix specific bugs more quickly. I want to convince you that stepping through your program in the debugger is a fundamentally valuable experience that will massively increase your understanding of the JavaScript language, the runtime, your own code, and the libraries you are using. It's exploratory, connected, illuminated, and surprising. The analogy I make is if writing to stdout is shining a flashlight on a particular variable value in your program, running the debugger is a bright lantern lighting up huge areas for you. You will see things without having to be specifically looking for them in a particular place a priori.

How to Use the Debugger

Get a Good UI Setup

Invest a little time to get a good window layout and workflow for seeing the web page you are developing and the debugger. The debugger can dock to the bottom of the window, the right hand side, or separate into its own window.

Enable source maps and explore the other advanced settings under the gear icon.

These are your bread and butter primary tools.

You don't need these very often, but under certain circumstances, they are essential to tracking things down effectively.

Some lines won't accept breakpoints. I don't exactly understand all of these, so please post a comment if you can explain. Sometimes I think it's just syntax where a single expression spans multiple lines and Chrome elects one of those lines (the last one I guess) as the one where a breakpoint can go. Other times I suspect the optimizing compiler has altered the underlying code such that a breakpoint doesn't make sense there anymore, but that's just a hunch that could be entirely incorrect.

Reloading the page sometimes causes a phantom breakpoint to appear and the code to pause.

If you edit the code in the browser while it's running, breakpoints tied to line numbers can get out of alignment.

Overall the UI is pretty cumbersome and could be made much better with some more usability studies.

Stick to one statement per line, and avoid complex nested expressions. Rather, put interesting values into variables where they can easily be inspected. So instead of this:

This is much easier to add breakpoints and inspect those intermediate values and step over line by line.

At the moment JavaScript code that heavily uses method chaining is frustrating in the debugger. Something like this is hard to step through and requires a series of step in and step out operations.

I'm not a big fan of the chaining style in general, but in particular it's a pain when working in the debugger.

As of node.js v6.3.0 and newer there's support for debugging via the chrome developer tools inspector built right into node core. No need for helper modules from npm and no need for a separate node-inspector server.

To debug a server:

If you need to debug a crash during the initial program load, you can use node --inspect-brk server.js to tell the debugger to immediately pause at the start of the program so you can step through and find any early startup bugs.

Under the hood, here's what's happening. 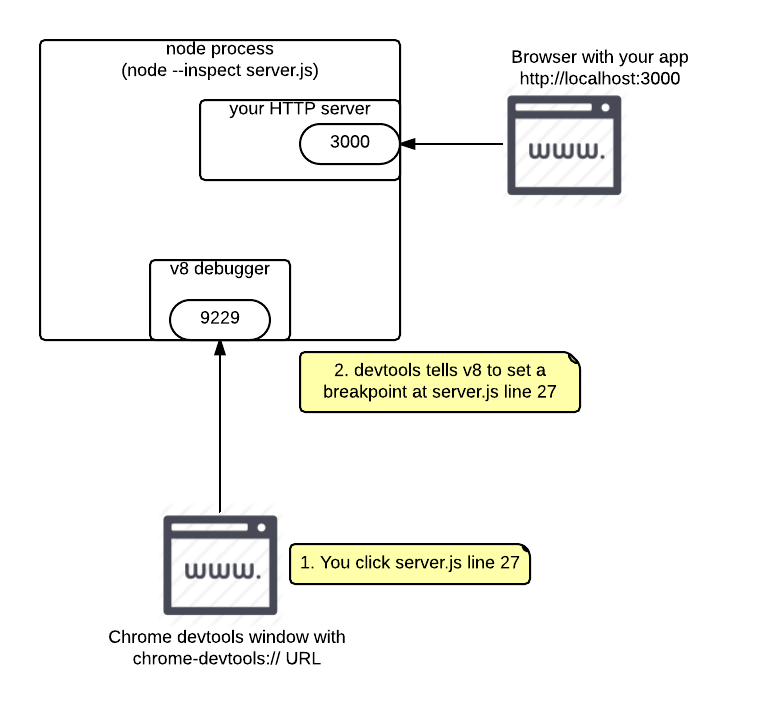 To avoid port collisions, you can provide an alternate port to the process for your mocha tests. This can be done with mocha --inspect-brk=6666, for example if you want to leave your application process's debugger listening on 9229 while you run mocha tests at the same time debugging them via port 6666.

You can run tape tests in the debugger by running node directly instead of the tape CLI program, and telling node to run the tape entrypoint script.

You can run tap tests in the debugger by running node directly instead of the tap CLI program, and telling node to run the tap entrypoint script.

For tap it works either way if you run the tap test runner program or even just a single tap test suite file. For example:

For projects I'm doing active, heavy work on, I usually run them under node-dev for automatic restarting on change and always enable the debugger, so node-dev --inspect server.js. If I have several projects or microservices that would otherwise create a TCP port conflict binding port 9229, I will pass a project-specific port like node-dev --inspect=9230 server.js.